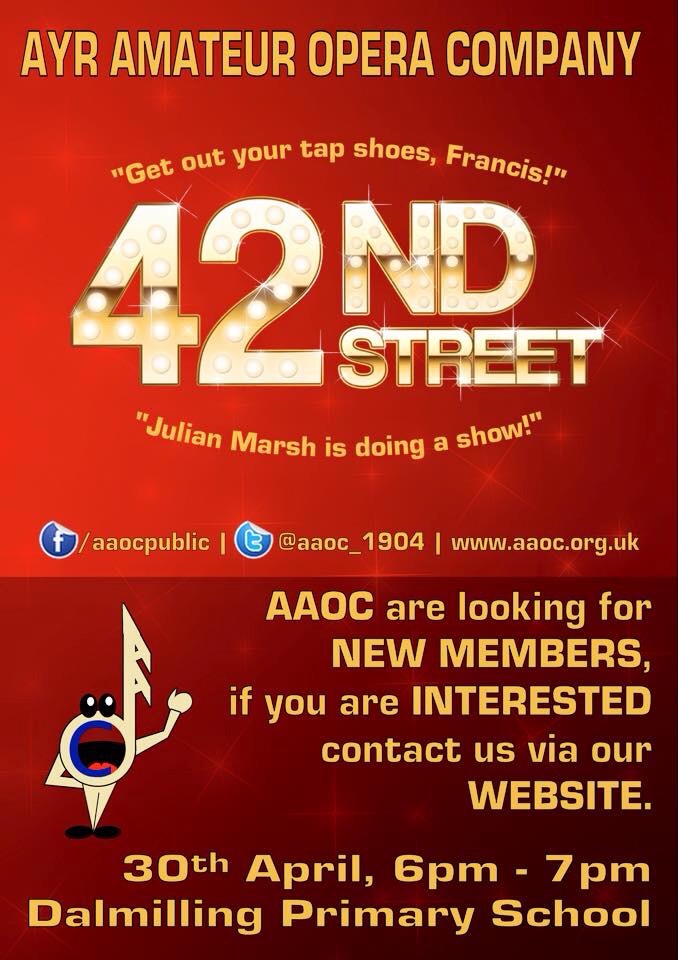 AAOC would like to invite singers, actors and dancers along to their new members audition night in Dalmilling Primary School on the 30th April. All new members must be 16 or over. After the great success of their last show, Disco Inferno, AAOC will be swapping the platforms for tap shoes in the Tony Award winning musical 42nd Street. The musical depicts a story of a humble, naïve young actress named Peggy Sawyer who has come to audition for a new Broadway musical however, due to her nervous nature misses her chorus audition. Luckily, Peggy soon catches the eye of the famous director, Julian Marsh, who gives Peggy her big break. On opening night, Ms. Brock -an ageing leading lady – falls and breaks her ankle. Concerns grow as the show is doomed for closure, until it is suggested that Peggy take the roll. In only thirty-six hours, Peggy learns twenty-five pages, six songs and ten dance numbers and becomes a star.

Rehearsals start soon after the summer holidays, right the way through until show week in February. For more information about the company and how you could be involved visit www.aaoc.org.uk or take a look at our Facebook Page (aaocpublic-Facebook)

Read more
This template supports the sidebar's widgets. Add one or use Full Width layout.